The final part of the 11th Lutkokaz offers three plays and one film that will be available seven days from the premiere date and a workshop by our theatre critic Anđela Vidović.

Tuesday, 1 June
Academy of Arts and Culture in Osijek, If I'm Gone
Based on Sergej Grigorjevič Kozlov's story If I'm Gone
Text: Maja Lučić and the ensemble
Directing and dramaturgy: Maja Lučić
Mentor: Tamara Kučinović, Assistant Professor of Arts
Visual identity of the Show: Maja Lučić
Scenography: Maja Lučić with family, Siniša Ardelić
Puppets: Maja Lučić, Tamara Kučinović and Toni Leaković
Music selection: Maja Lučić
Performers: Toni Leaković and Andrija Krištof
About the show: Somewhere at the end of the world, and perhaps even further, there is one forest. In that forest, two friends, Bear and Hedgehog, sat on swings every night and watched the sky. It was the same that night. It seemed that the two of them would again watch the stars fall together and make wishes. But... Hedgehog was strangely quiet that night. From that, it could be guessed that this evening would be different. That this very evening Hedgehog would ask a question that would change their lives forever…
Age: 12+
Duration: 45 minutes
Language: Croatian with English subtitles
Available until: 8 June 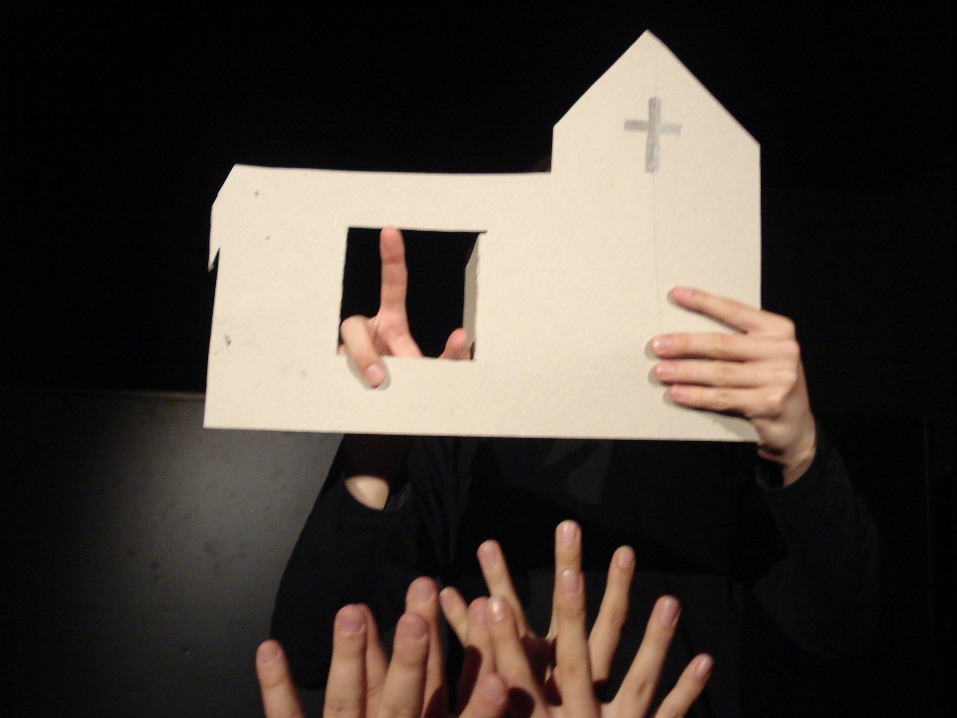 Final exam in animation by Filip Eldan, Nikša Eldan and Nino Pavleković at the Academy of Arts and Culture in Osijek
Author: Denis Peričić
Music: Nikša Eldan, Filip Eldan, Nino Pavleković
Cast: Nikša Eldan, Filip Eldan, Nino Pavleković
Mentorship: Ljudmila Fedorova, Tamara Kučinović
About the show: Hell on Earth by Denis Peričić is written in the tradition of the mystery play, which are an important part of Croatian literary and theatrical history. This play portrays the strange, unexplainable and hellish events which portend the coming of Judgment Day, as well as the faith of the protagonist, vicar Mihalj Mendušić, and his battle against the forces of Hell“ (Borna Baletić, in the explanation of the „Marin Držić“ Award Committee). Three students of acting and puppetry have staged this text as a puppetry play in which the set, costumes and props are replaced by the actor’s instrument: the body. It is exactly for this reason that this play uses the animation of body parts in various theatric forms such as black theatre and shadow theatre.
Premiere: AUK, 2013. godine
Age: 14+
Duration: 35 minutes
Language: Croatian
Available until: 9 June

Friday, 4. June, 20h
Academy of Arts and Culture in Osijek, Hymn to the Absurd in Relation to the Melancholy Present - Diary of an Anarchist and Nihilist Academic Group – film
Exam material of the 1st and 2nd year graduate students of puppet animation from the course Puppetry Master Workshop: From Text to Staging
Mentor: Jelena Sitar, Associate Professor, Gordan Marijanović, Assistant
Performers: Laura Šalov, Nina Vidan, Andrija Krištof, Nikola Radoš, Toni Leaković
Special thanks to: the City of Osijek, GPP Osijek, Dance studion Shine, Hotel Central, Bruno (Sandra) Očević, Ivan Simon, Jura Ruža, Filip Sever, dog Grga
About the film: The inspirational impetus for the film is drawn from the literary opus of the Russian writer Daniil Harms, whose absurdity is recognized in the present world. The authors and performers decided to take the theatre to the streets, interact with people and connect it inclusively with film media. Puppetry principles in framing, relationship with objects and character creation enabled them to create a guerrilla troupe whose absurdity reveals the strangeness of the ordinary.
Age: 12+
Duration: 60 minutes
Language: Croatian
Available until: 11. June

Monday, 31 May, 21-22h, Wednesday, 2 June, 21-22h
Anđela Vidović, Why Write in the Change of Air (2x60 min)
Main idea of this multi genre two-hour workshop is to combine different literary techniques (from Anton Chekhov to Joan Didion) while showing the participants the inside life, knowledge and tradition which comes within profession of a theatre critic. No response to critics is needed. Listen to your own conscience.
1. Why and for Whom Should One Write – what can we learn from E. Hemingway, J. Didion, K.Vonnegut, D. Mamet, G. Orwell, J. Salinger and A. P. Chekhov when we start to think about writing reviews
2. A Change of Air – drama, performance, and me in the middle – different perceptions on what is the theatre (author in the middle, no writer, nor director)
Note: For participants of the theatre criticism workshop within the project “Critical Platform of Contemporary EU Puppetry”