He had no reason for it

The object-musical cabaret Darkroom (Temnica) begins not in the darkroom, but in the Židovska steza (Jewish alley). People slowly gather and navigate between the various stations along this narrow alleyway while waiting for the performance. With the light of the street lamps and the bustle of activity, a strong atmosphere is immediately created that attracts the curiosity of visitors and passers-by alike. There are too many stations for everyone to fully attend each one, so it is up to the audience to decide what appeals to them most and how much time to spend on each one. Guest animators Tončica Knez (also assistant director), Klemen Kovačič, Tajda Lipicer, Sara Šoukal and Helena Šukljan prepare short interactive scenes and narratives that mix wit and darkness, but above all reflect the history and spirit of this alley. At each station, spectators earn a rank, a variety of small, worthless objects related to the scenes, which are a kind of honour, and a key to enter the "darkroom" or the Kulturnica LGL.

The way to the hall is gloomy, the corridor completely transformed, full of exhibits, negatives and chalk inscriptions, which gives a gloomy impression of the double meaning of the darkroom in Slovenian language – a place for developing photographs and a place for prisoners and inmates (a dungeon), without the production making any effort to explicitly explain and exploit the parallels between the two meanings. We enter the darkroom, we give up our rank, the actors sit us down sternly, almost reproachfully (in the light of the other meaning of the title), and the central part of the performance begins.

Matija Solce's directorial poetics is distinctive and eclectic in its combination of musical, animation, live-action and visual inputs. This is echoed in Darkroom, to which he contributed as director, and as the author of the adaptation and the music. The core of Solce's team consists of animators Gašper Malnar, Miha Arh, Filip Šebšajević and Asja Kahrimanović Babnik (the first three of whom have been Solce's collaborators and co-creators for many years), who unveil fragments of the fairy tale The Steadfast Tin Soldier, by one of the greatest fairy tale writers of all time, Hans Christian Andersen. They act as an almost uniform collective, melting into different roles and situations, as well as using cold metal, laboratory and magnifying objects to create experiments, illusions and deceptive images in changing brightly coloured, almost neon lights, which further intensify the atmosphere of the photographic darkroom (visual design by Tomáš Žižka and Nerea Cuesta Garcia). The element of the spoon, which represents the tin soldier and from which the soldier in the fairy tale was created, is particularly emphasised. The sequence with the fish swallowing the tin soldier – created with a huge lens and hand animation – is also very effective and inventive.

At the same time, the actors are constantly shaping the soundscape of the performance – Asja Kahrimanović Babnik plays the accordion, Miha Arh plays the electric guitar, Gašper Malnar plays the cymbals, Filip Šebšajević mixes music and beatboxing live (he is also the co-writer of the music). All of them sing together in canonical multi-part harmony, which, with the sharing of the objects and the simultaneous action, becomes a deliberate cacophony. They play with repetition, nonsense, syllables and refrains. In addition, Asja Kahrimanović Babnik sings the central musical motif at the very beginning of the performance with the lyrics "Brave soldier, never fear. Even though your death is near." and a simple melody that goes quickly into the ear and engages the audience to join in the singing (Solce's technique, also seen in Session Bulgakov).

In the visual and musical spectacularity and innovation, the content of the fairy tale itself and the mental core of the performance are partly lost. The biggest gap in the show is its scattered dramaturgy (Jelena Sitar, Benjamin Zajc), which offers too little grip for a more holistic experience of the journey with the soldier and the unravelling of all (or at least most) of the otherwise interesting semantic settings. It is even harder to keep track of all the rapidly changing situations, bits of text, characters and Andersen quotes if you don't already know this tale of the one-legged tin soldier, or if you only remember it as a distant, muffled childhood memory. Rather than the sensual longing and love affair with the paper ballerina of Andersen's fairy tale, the performance focuses its narrative through the perspective of tin soldiers who never wanted to be what they are, though this is only partially evident in the production. The very setting of the action in the darkroom and the connection between the first street part and the "performance" in the theatre also remain unclear. Although both parts are interesting, elaborate and atmospherically very strong, there is no obvious substantive or formal bridge between them, which would round off the whole event and weave the two poles of the dialogue together in terms of meaning. 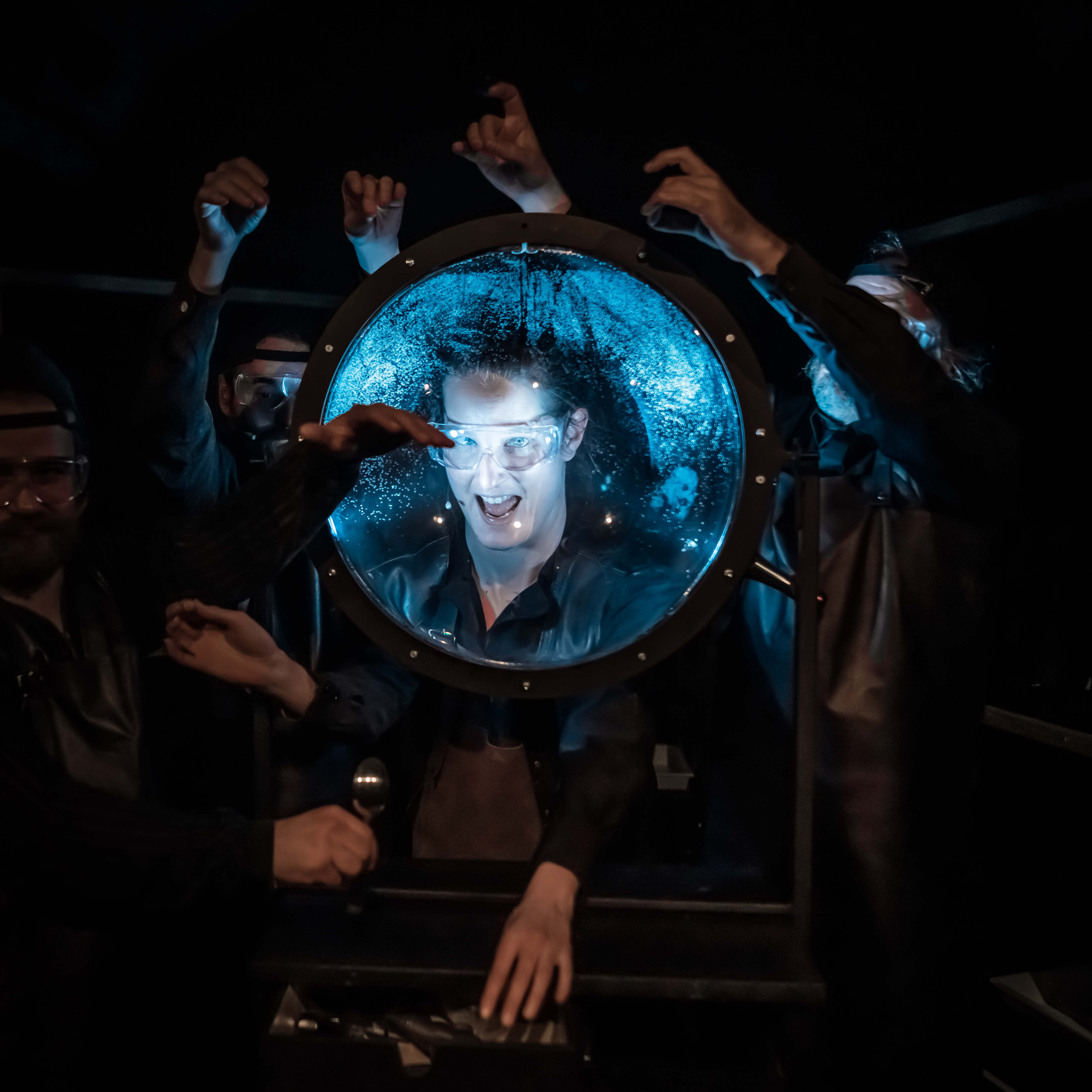 The idea is most clearly drawn at the end of the performance, when Solce himself appears, accordion in hand, and together with the performers, sings the Ukrainian folk song Oi there on the mountain about a dove and a pigeon shot by a hunter. The dove cannot get over the pigeon's death, despite the abundance offered by the hunter. The song is a clear political gesture, also making sense of the constantly repeated phrase "He had no reason for it," the opening musical motif of cheering on the soldiers who have been forced into the army and, above all, a loud call for peace. However, this is another in a series of symbols that, when viewed, do not have their full effect, as the song is not wide enough known to be instinctively associated with Ukraine, and the lyrics are also incomprehensible when sung in the original language.

Nevertheless, Darkroom is an ambitious puppet project, full of humour, unexpected twists and turns and animated attractions for the eyes and ears. All the performers are extremely precise and coordinated in their work, eliciting many reactions from the audience and convincing through their presence or the feeling that they, as well as the audience, are having a lot of fun with the show. In this way, the creators avoid being pathetic and moralistic, though this is partly at the expense of the effectiveness of conveying the ethical message of the performance. Solce's directorial approach remains recognisably ludistic, playful and animatorially innovative, if sometimes overwrought. With an awareness of the current political context, the play cuts poignantly into the most pressing issues of the moment and emphasises that there is never any justifiable reason for the horrors of war.