The critique was originally published in the newspaper Delo (24.9.2022), with which the platform collaborated during the Lutke Festival 2022.

Matija Solce, a renowned artist in Slovenia and around the world, participates in the 16th international biennial festival of contemporary puppetry Lutke with three puppet cabarets: The Hatchet, Exit and Darkroom (director, adaptation and music by Matija Solce). Darkroom is a music and puppet omnibus for adults, based on the fairy tale The Steadfast Tin Soldier, by Hans Christian Andersen, and produced by the Ljubljana Puppet Theatre.

A spectator who is familiar with the productions directed by Matija Solce expects a theatrical experience filled with music, witty humour, thoughtful irony, masterfully crafted animation, interactivity and a tense atmosphere. In this respect, Darkroom follows the development of the artist's style and offers all of the above. The place where the theatrical experience takes place is an important element of the production; hence the three-part structure, with the first part taking place in front of the theatre hall (Kulturnica) on the Židovska steza (Jewish Alley), through short stops focusing on the technique of object theatre, performed by young guest artists (Tončica Knez, Klemen Kovačič, Tajda Lipicer, Sara Šoukal, Helena Šukljan), including stories and anecdotes from the history of this alley.

The second part is a preparation for the entrance to the main part of the performance. Here, an installation of photographs, wire figures, metal sculptures and mirrors is unveiled in the dark anteroom of the theatre hall (Tomáš Žižka and Nerea Cuesta García are the authors of the artwork and set designers). Meaningful inscriptions with questions about eternity and the purpose of life and hints at the spirit of 20th century Dadaist artists dictate the transition into the world of the darkroom, a photographic studio where several stories and events will take place.

The creators in the truest sense (Gašper Malnar, Filip Šebšajevič, Miha Arh, Asja Kahrimanović Babnik, all of whom have collaborated with the director before), as they showcase their animation, acting and music skills, take the audience into a photographic laboratory. Each object (spoon, top, paper, tweezers, dominoes, granite cube, funnel, tin can, lamp, etc.) represents an opportunity to rediscover it and search for its material qualities, sound and meaning. Each object can tell its own story and is used to recreate Andersen's story of the tin soldier and the paper ballerina. The bits and pieces, the motifs of the story, follow the same sequence as in the original story, but they appear sporadically within the production and are sometimes hard to identify, especially without prior knowledge of Andersen's story. 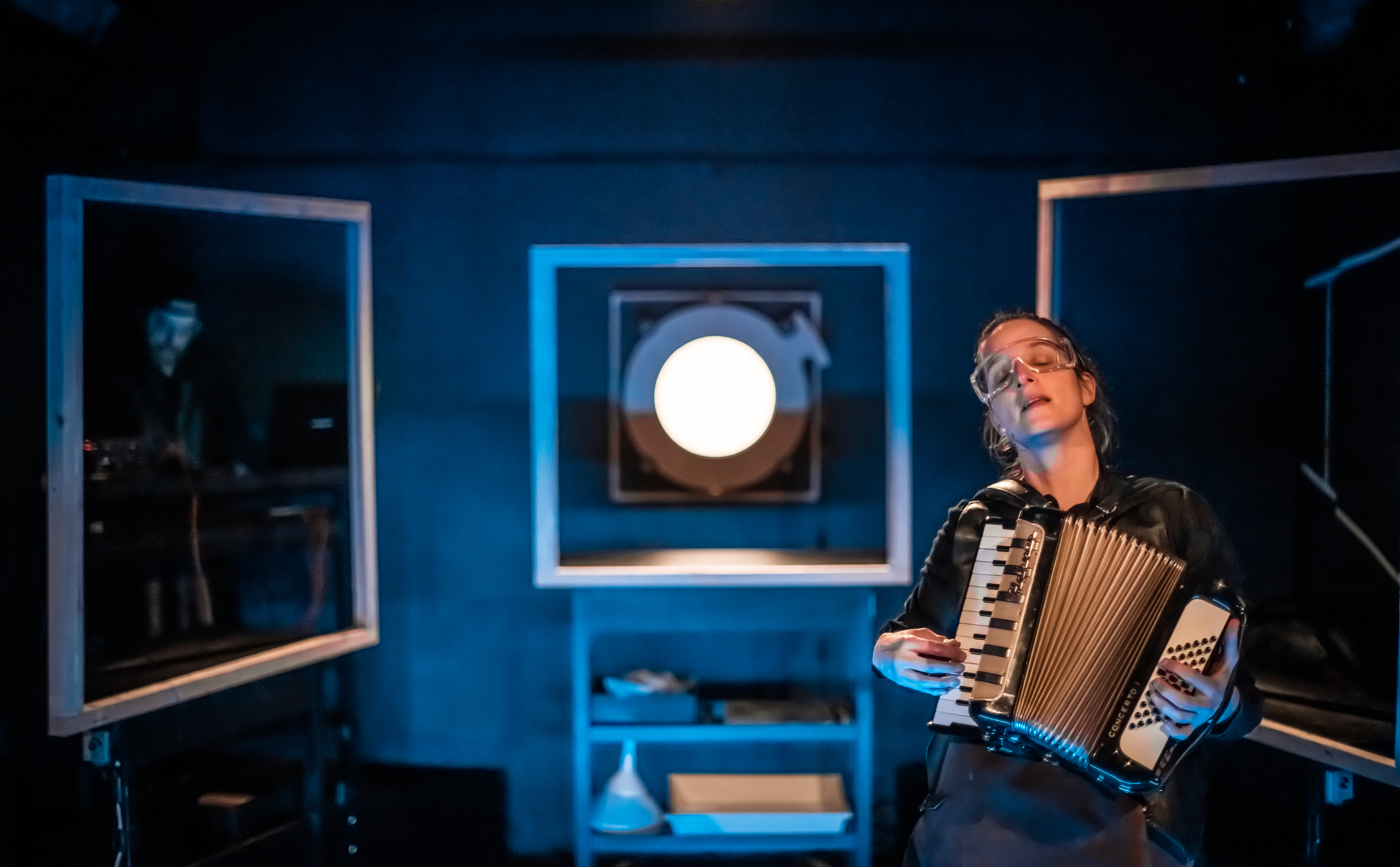 Playing with the sounds of objects, the transition of sounds or phrases from the literary material to the songs (the music is co-written by Šebšajevič, who is joined by other performers at the mixing table with accordion, electric guitar and cymbals), entering and exiting the rhythmic action into its diametrical opposite, create a zone in which the spectators will be actively involved by repeatedly searching for associations with what they have heard and what they have seen.

In Darkroom, it is noticeable in the militant attitude of the performers, the repetition of the song about the soldier, and in the ending of the production, which, by singing a Ukrainian folk song about two pigeons and the concluding phrase ("He had no reason for it"), stimulates everyone present to reflect on the socio-political actuality of the time.

Although the rhythm of the narrative arc is at times lost during the production (dramaturgy by Jelena Sitar and Benjamin Zajc), especially due to the weak interconnectedness of all three parts of the production and the abundance of associative stimuli, Darkroom is an experiential production that the spectator will definitely want to see several times.