In its final, third block, the 11th International Puppetry Revue Lutkokaz honored its faithful viewers with a film adaptation of the beautiful theatre show Sandpit by Ljubljana Puppet Theatre. The show, which lasted about half an hour, was like a blink to me. It simply took me back to my childhood, where I indulged in the images that were being created in front of me.

“In the beginning was the Word”, says the Holy Scripture, and here at the beginning is… the Bucket. The stage is stripped of everything and in the middle, there is only sand that flows freely, not caring about anyone. Dimly lit, it represents a time to me personally. A time that has no dimensions that we assign to it, such as the past, the present, the future, a constant that melts involved in all life processes on earth. Actors Miha Arh, Barbara Kanc, Gašper Malnar and Filip Šebšajevič walk along the sand, unaware of its presence. They go in groups or separate. At times they act together, then one separates as a revolutionary and then they go back and forth, depending on which side of the sand we look at, giving the movements various meanings.

After the first people, the bucket starts moving and the creation begins. And where are the people? The performers are disappearing into the darkness as something very impressive is now being prepared. A magnificent, distant, and vast universe emerges from the darkness. Galaxies, stars, dwarf planets, and the star that guided the wise men and everything we imagined when we were little astronauts when we dreamed of something elusive, a star at our fingertips, a star to reach out to, enchanted by what is above us. Something bigger than us, which we respect. Darkness. Light. 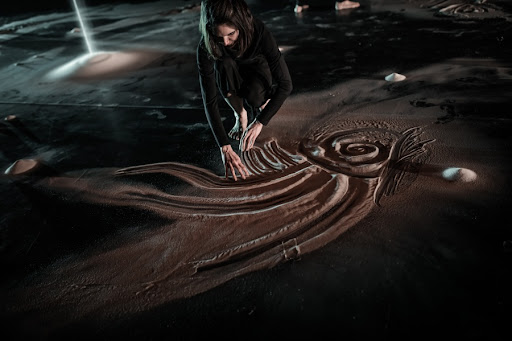 Skilled animators are now turning stars into the first organisms on the planet. We are all made of stardust, and that transition was intelligently made by the play’s author, director Miha Golub. We come to the ice age, dusk descends on a civilization inscribed in the sand, and ruthless leeches trample all organisms in front of them, creating fossils out of them. The way in which that image is obtained is actually interesting. The performers walk around the stage, holding boxes from which sand falls out in their hands. Moving with them across the stage, guided by a skilled camera, the viewer forgets that they are active creators of everything.

After the storms on the continent have calmed down and the bucket has stopped with its stormy circulation, people are returning. They play with a bucket, throw it and avoid it, at times treating it like children, and sometimes like adults. From these movements, Golob tried to bring us closer to a man's relationship with himself and others. We arrive at the first sandcastles or the first great civilizations in which harmony creates beautiful mosaics in the sand. By adding and subtracting sand, the animators go beyond the medium itself and I have the feeling that I am traveling through time, watching the first larger communities grow next to me. The circle is in the middle and the wheel on which the people will be taken is ready to go, and the bucket is slowly swaying and being drawn. As it sways gently like a child in a cradle, so the first images of great nations are born before us. Putting us to sleep, the bucket takes us to ancient China and their dualism, then goes to Africa and the Star of David, Babylon, ending with a beautiful floor mosaic in a Roman villa on the slopes of the Eternal City. In addition to cities, the sand does not forget the small villages. Sand remembers everything. First, we have large meadows that become small arable lands, and then they become bigger and bigger until society begins to divide into those who live in cities and those in the countryside. As the village shrinks more and more, and the city conquers green areas, pushing the little man to the edge, we can't help but get the impression that the author had a lesson for the viewer. Cities of sand swallow everything in front of them, turning into large skyscrapers that man himself replaces with even bigger and taller ones, neglecting nature. As is usually the case, when man exaggerates, Mother Nature sets the balance. This time she does so by letting her river that clears the city of rubbish and debris tear down all the skyscrapers in front of it. There is a gap between nature on one side and man in the city on the other. It all ends with a big clean-up after the flood, where the animators lead the spectators like pigeons that led Noah ashore. To the bucket and the sand. In the end, there is only a bucket over the sand and the author leaves it to the viewer to ask whether he is playing in the sand or the sand is playing with him, keeping in mind everything that has passed before his eyes. 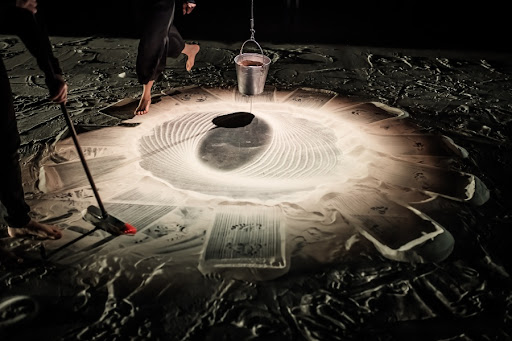 Miha Golob, who arranged it all beautifully, is also responsible for the beautiful visual design of the play. The dramaturgy that flows in front of us like a river is attributed to Mojca Redjko, and I commend the light designers Maša Avscec and Gregor Kuhar, as well as the animators. It is said that the play is suitable for all ages, which it really is, and the language is non-verbal, therefore universal. Like a story. Like the sand that is ubiquitous.