The west Bohemian town of Pilsen is known around the world for its beer, but it is also the cradle of Czech puppetry. Its rich history, linked to the legendary Czech puppeteers Josef Skupa and Jiří Trnka, is mapped by the local Museum of Puppets It is part of the West Bohemian Museum in Pilsen and can be found on the city’s main square.

The Museum of Puppets opened in 2009 in a medieval townhouse with a Renaissance facade, a former bathhouse from the 17th century. Today the building is inhabited by nearly 200 puppets, both old and contemporary. Museum curator Veronika Plachá takes us on a guided tour, which starts on the ground floor:

“The exhibition begins with a section on the early years of puppetry in Pilsen. We have panels dedicated to folk puppeteers and also one unique showpiece - the revived theatre of gingerbread maker Čeňek Škoda from the late 19th century, which was the first permanent puppet theatre in Pilsen. It is a model based on a preserved negative.

“In the summer, Čeněk Škoda would sell his products at fairs and pilgrimages, and in the winter, he would perform theatre pieces. He had the theatre built in the back wing of his house and it was popular especially with children, because he played with puppets half a metre high that could walk, and used Bengal fires and other attractions.”

"There's a king, a queen and a knight, which were popular characters at the turn of the 19th century."

As museum educator Jana Košová explains, these are original wooden puppets, up to half a metre tall and more than a century old.

“These are basic figures, because the puppeteers who travelled in the 17th or 18th centuries had few puppets to play with. Making a puppet was complicated and expensive. The characters had to be neutral and have neutral facial expressions so that puppeteers could use them in different roles. A female puppet could play a princess, a queen, a maid or even a witch."

“These are marionettes, the most popular type of puppets for travelling puppeteers. Marionettes are made of soft lime wood, which is easy to carve. They usually have a wire attached to the head, on which a wooden hand controller is mounted. There are strings attached to the puppet’s arms and legs to make them move.”

Another part of the exhibition is devoted to family puppet shows from the early 20th century. Right next to them, the Puppet Museum displays one of its biggest attractions, the recently restored diorama Fireflies’ Wedding.

World-famous puppet filmmaker and Pilsen native Jiří Trnka created the diorama on commission for the 1939 World Exhibition in New York, but the diorama never made it to the United States due to the occupation of Czechoslovakia. Jana Košová describes the unique exhibit:

“Jiří Trnka was inspired by Jan Karafiát’s book Fireflies’ Stories, which he also illustrated. The diorama is called The Fireflies’ Wedding, but we are actually looking at a wedding of ladybugs. There are 57 puppet characters in the diorama. There are not just ladybugs, but also snails, grasshoppers, plants...

“What's interesting about these is that some of them have survived in their original state, so we even have dried plants and grass from 1939. The other flowers are artificial. Jiří Trnka created them in cooperation with a company that manufactured hats and had experience in making floral decorations.” 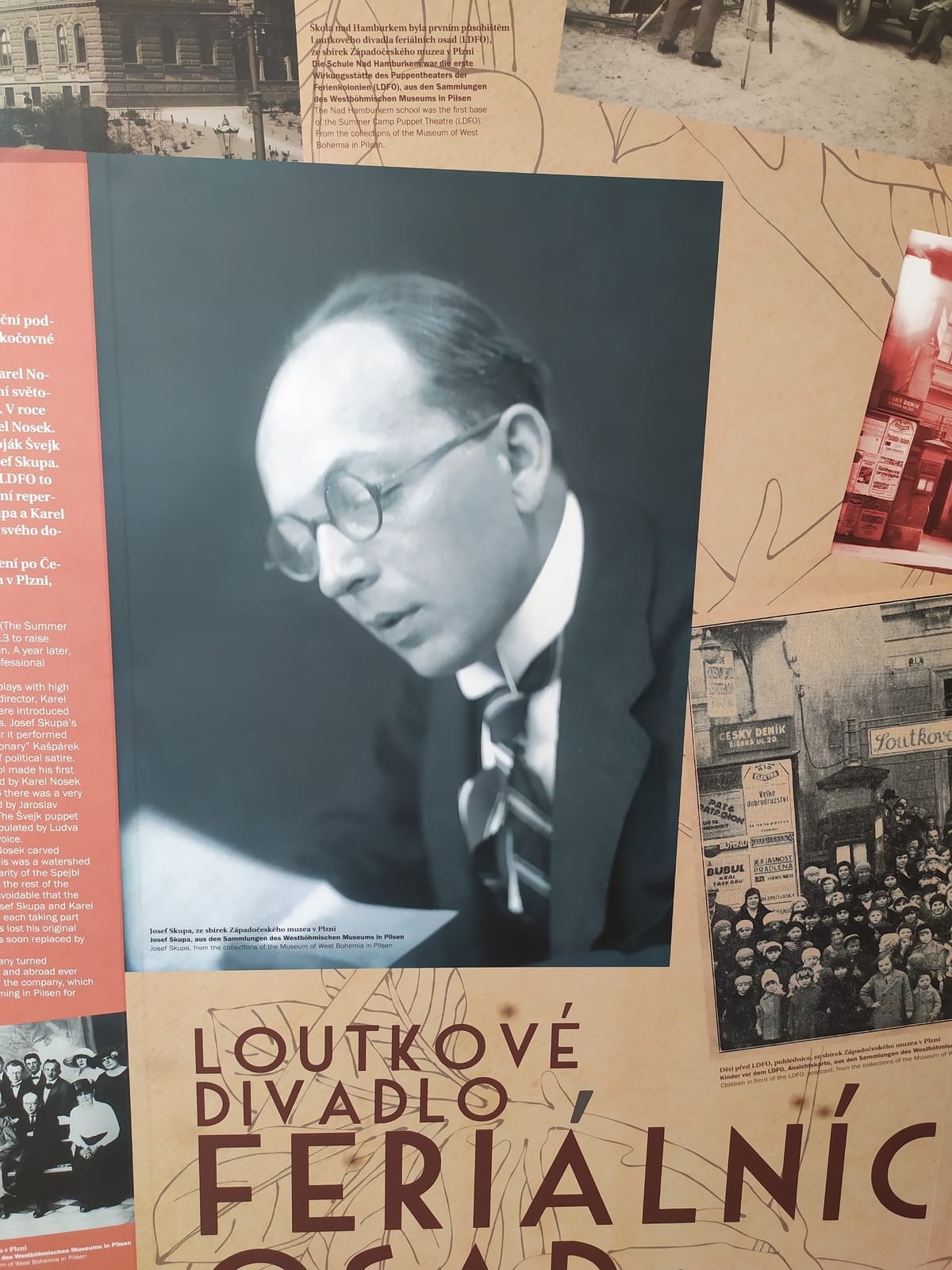 Another important personality on the Pilsen puppetry scene was Karel Novák, the principal of the so-called Summer Camp Puppet Theatre. The theatre operated in the West Bohemian town between 1913 and 1935 and, according to Jana Košová, it was very popular:

“Pilsen was quite a polluted industrial city. Local teachers wanted the children to spend their holidays out in the fresh air, which is why it’s called the Summer Camp Puppet Theatre. They approached puppeteers and puppet actors with the idea of doing puppet shows, the proceeds of which were used to finance this convalescent stays. The project was a great success in Pilsen and made puppet theatre even more popular than before.

“Karel Novák, originally an itinerant puppeteer, was invited to join the theatre and performed there with his whole family. He later settled in Pilsen and the performances of his troupe were a huge success there. He also had a rich variety of puppets, which was not common at the time.”

“In the museum, we have a large mechanical model of Karel Novák's theatre, which we call Loutkomat. Thanks to it, the audience can see excerpts from three of his plays.”

Karel Novák had a team of carvers to make his puppets. At that time there were no artificial materials, so they used human hair and beards, but also animal hair.

In addition to Loutkomat, there are other famous characters from Karel Novák's plays showcased in the Pilsen Museum, such as Belial the Devil, who is about 200 years old and is one of the oldest local puppets on display, or the historical figures of Jan Hus and Jan Žižka.

One of the most beautiful marionettes are six dancers in Moravian Slovak costumes, connected by threads into a single sash. The puppet was therefore controlled by one actor, who had to be really skilled to move the dancers without getting the threads tangled.

Josef Skupa, a versatile artist, designer, director and puppet actor, who created perhaps the most famous Czech puppets Spejbl and Hurvínek, which he himself both spoke and conducted, began his career at the Karel Novák Theatre around 1917. Curator Veronika Plachá explains how the puppets were born:

“At the turn of the 20th century, the puppet of Spejbl first appeared on stage. It was sculpted by Karel Nosek based on Josef Skupa's design. About six years later, another well-known carver, Gustav Nosek, carved the Hurvínek puppet of his own initiative. The couple became extremely popular.

Baldhead, big ears, tailcoat and clogs – these are the main features of Spejbl, who first performed in cabarets for adults. After some time, he became the father to the naughty Hurvínek. The child puppet has a special mechanism in its head that allows Hurvínek to roll his eyes.

While we know a lot about the characters of Spejbl and Hurvínek, there is less information available on the puppets. Over the years, many copies have been created to perform on theatre stages and television. The puppets displayed in Pilsen are not originals, but copies from the 1930s and 1940s, explains Jana Košová:

“We don't know where the originals are. Spejbl played small roles in the theatre at first, often performing with a live dog jumping on him and tearing him apart. The puppet was therefore remade many times, and it's not clear where it ended up.

“It's even more complicated with Hurvínek. The carver Gustav Nosek is said to have given it to someone, there is a rumour that it ended up in Moscow. If someone finds the original Spejbl and Hurvínek, it will be the discovery of the century!"

The second floor of the Puppet Museum is dedicated to contemporary puppetry, especially the Alfa Theatre from Pilsen. Visitors can touch the puppets on display and also move them, says Eva Košová:

“We are now in what is probably the most fun part of our museum, which is the museum’s theatre. Here visitors can try their hand at guiding the puppets, they can play out fairy tales on the stage. We have different types of puppets here - classic marionettes, puppets as well as mannequins.”

The centuries-long Czech puppetry tradition has been part of the UNESCO world intangible heritage list since 2016. For those wanting to learn more about Czech culture, both young and old, the Pilsen Museum of Puppets is definitely a place to visit.