Still Life or is it really so?

The current season’s performance of the Puppet Theatre Ljubljana titled Still Life left me with mixed feelings. The positive ones certainly go to stage director Tin Grabnar and his exceptional director’s eye, to the dramaturgical skills of Tjaša Bertoncelj and very precise puppet animation by actors-puppeteers Asja Kahrimanović Babnik, Iztok Lužar and Zala Ana Štiglic. I would like to add here that the rest of the team credited for the realization of the performance includes costume designer Sara Smrajc Žnidarčič, the author of music Mitja Vrhovnik Smrekar, sound designer, sound and music effect designer Eduardo Raon, puppet technologist Zoran Srdić, the author of videos Vesna Krebs and light designer Gregor Kuhar. The performance is for the most part left to the audience’s personal judgment and it can be interpreted in numerous ways. What I did not understand and what was left unsaid, and I am pretty curious about, is what the authors themselves think about the topic? Do they take an affirmative or subversive attitude towards it and how they justify their attitude? Has it been an area of their interest before or do they implement it in connection with puppetry?

The performance deals thematically with the question of taxidermy, that is, animal stuffing, in this case of rabbits, which for me opens up a lot of room for a discussion from the beginning. Personally, I consider any exploitation of animals selfish, careless, reckless and absolutely unnecessary. The very introductory part of the play, shaped as a conversation about the ways of collecting rabbits for taxidermy treatment, raised a number of questions in me and the need to comment on some of the uttered sentences. One of the taxidermists said that he hoped his work “would inspire people to have more respect for nature and other living creatures.” I find this statement cynical and ironic because I do not see how killing and “re-filling” of animals can inspire someone in a positive way? Especially when bearing in mind what has been done to the animals’ innards. The similar applies to the statement of one of the taxidermists who says that animals have always been his “greatest love”. If we observe that from the perspective of taxidermy, e. g. a person who is engaged in it, isn’t it selfish to state something like that because there is not a single living animal in the performing space. Moreover, to what extent is this approach morally justified?

On the other hand, when observing the story exclusively from the prism of a puppet theatre performance, I was pleasantly surprised by the idea of bringing still life back to life. Taxidermy may not bring a non-living being back to life, but puppetry does. Animation as well. Breathing the soul into a puppet is that very essence of puppetry. We create the living through the inanimate. And that is the thing that drew me to the performance and made me watch it until the end. I wanted to find out how the authors would justify this “technique” on stage, how they would animate it and create the illusion of life. And I can say that they completely succeeded. Taxidermy cannot serve as a metaphor of life, but puppetry sure can. 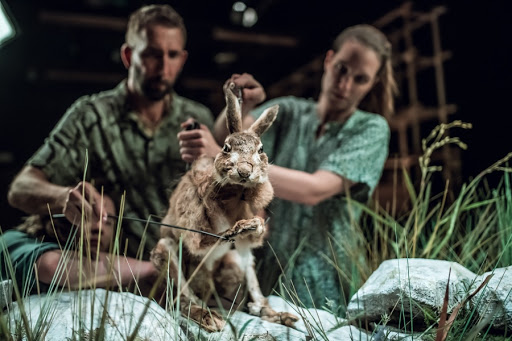 As for the animation, I have to praise the puppeteers Asja Kahrimanović Babnik, Iztok Lužar and Zala Ana Štiglic. I noticed great precision and dedication in the animation part. It showed exactly how much each person was devoted to the performance, especially because the animation task was very challenging due to the animation in a group of three in where one should take great care when handing over certain parts of the puppet’s body to the other animator. Precision and harmony were clearly present in the extremely skilfully shaped gait, jumping, digging and scratching. Personally, what bothered me a bit was the long change of scenery that filled a great part of the performance. Yet, on the other hand, I would say that I was pleasantly surprised by the credibility and realism in depiction of both puppets and scenography.

Something I would especially like to point at is the end of each scene indicated by turning on of the spotlights. What got my interest is the question what happens to the rabbits after the break? Do they die? Are those the last moments of their lives? All those questions have remained unanswered. At the very end of the performance what remains are all those rabbits’ dead bodies that were alive a moment ago, even if stuffed, but at least for a moment puppetry breathed life into them.

In conclusion, I would say that this is an interesting and didactic performance if observed from the right angle. I wish I had a better understanding of what the authors wanted to say with the performance, that I got a clear point and their attitude towards taxidermy because in that way I could also understand the motivational point they started from. As I watched the play online, I paid a lot of attention to the moral layer of the performance and some scenes, returning to them not at all carelessly. And maybe that is the meaning of this performance – to get into people’s heads to think about what the real metaphor of life is, just like Still Life lives on, at least in puppeteer’s head.