The rise of new ways of viewing

The Lutke Festival as an encounter between fringe, experimental and in-depth performance languages.

The article was originally published in the newspaper Delo, with which the platform collaborated during the Lutke Festival 2022.

Alongside the existential themes, the festival's productions echoed with a sense of existential anxiety, uncertainty and disorientation in a world of apparent meaning, but actual disintegration of values and moral disorientation. The artists answered the question of the collective crisis with solipsistic self-reflection (Carte Blanche), by questioning where the tyranny of one-man rule and the absence of critical questioning leads to (The Great He-Goat), and with global reflection in the form of documentarism (The Melancholy of the Tourist, The Mountain). It is the relationship between the human body and the object that has often self-consciously explored the themes of objectification and hierarchisation of different (plant, animal, human) lives (Corpus, Transfiguration, The Picture of Dorian Gray, Something Softens).

The fact that we are in the midst of a coming cataclysm, which will significantly challenge our very existence, was also suggested by the visual image of the festival, which was created by designer Ajda Schmidt. As she said, "the central element is the skull, which symbolises not only death, but above all the immortal, universally recognised Hamlet scene, which is most visually defined by this proto-requisite, proto-object, proto-puppet of Western theatre. It is set in two geometrical figures – the upper one is wobbly, off its own axis, and it has been displaced by this very object. Theatre, then, does not merely hold up a mirror to society, but has the power to shake and sober its status quo by the reflection it offers."

The interdisciplinary and inclusive character of the puppet

Artistic director Ajda Rooss announced at the beginning of the festival that this year's Lutke will show "the symbiosis of contemporary puppetry with abstract experimentation within representational visual languages, which, in a fresh alliance with digital technology, also creates new performative dimensions".

And indeed, there has been a range of creators who, with their unique authorial poetics, are redefining the boundaries, possibilities and identity qualifiers of puppetry. Since puppet theatre is more often equated with scenocentrism than with cognitive-oriented logocentrism, many of the festival's productions highlighted this very potential of puppet theatre as an immersive aesthetic experience. The new alliance between contemporary technology and puppetry, through a range of performances, emphasised the interdisciplinary and inclusive character of puppetry and established its theatre as an art that does not see technological progress as a more attractive rival, but embraces it in its creative sieve. 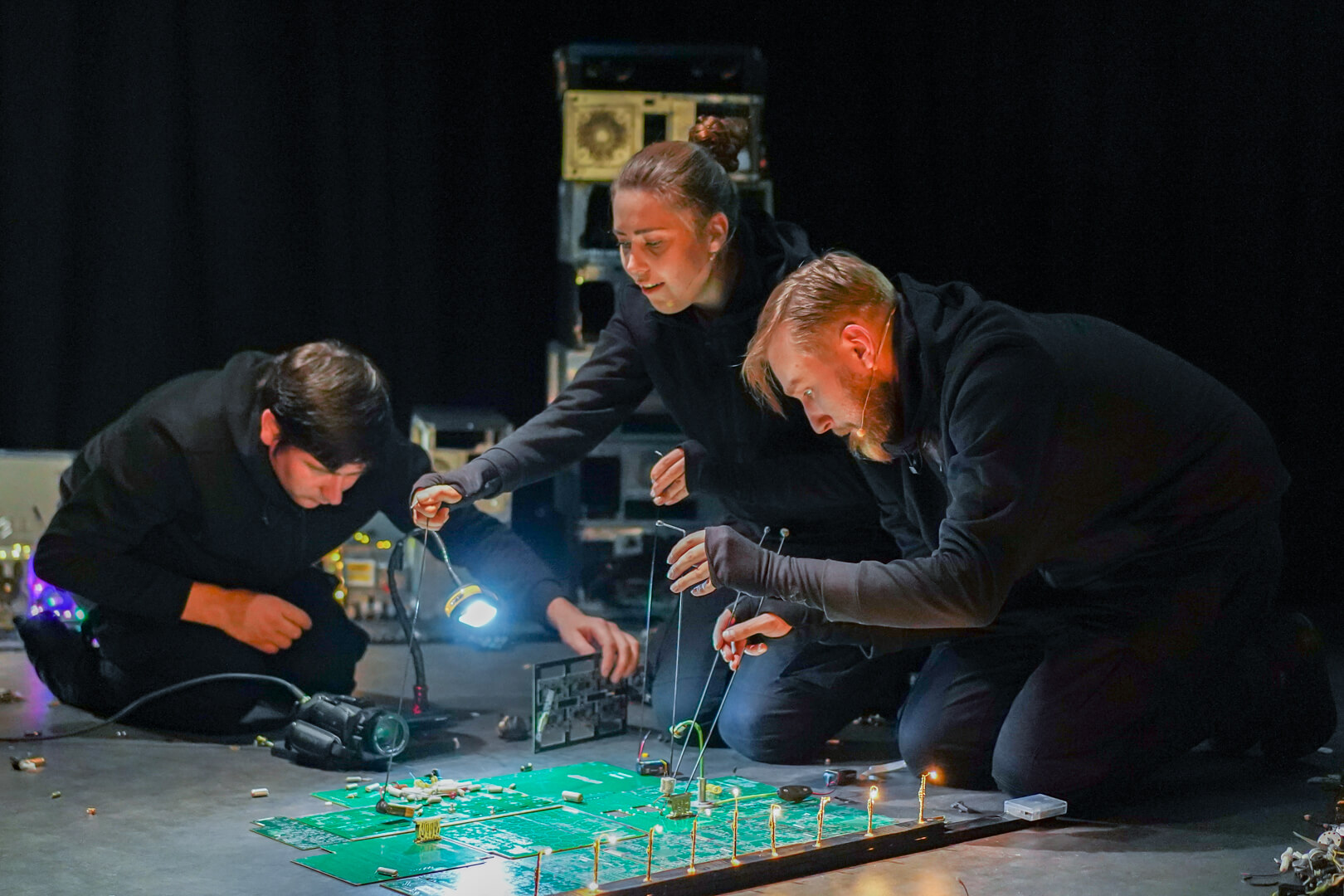 The direct link between technology and puppetry was most clearly explored in The Big Bang, a co-production between the Lithuanian Klaipeda Puppet Theatre and the Kolektiva Itim. It pushes humans off the Earth and moves the planet to the future, when smart devices, cables, cameras and chips come to life. Based on live film creation (animators Monika Mikalauskaitė-Baužienė, Vytautas Kairys, Kęstutis Bručkus animate the puppets in front of a camera, which projects the image live onto a large screen), the performance offers an insight into the techniques of contemporary puppet theatre in the Baltic States, which we are already familiar with in our region, and may even have outgrown a little, but which nevertheless provide an interesting insight into the question of the relationship between the puppet and the robot, which has been relevant for at least a decade now.

A demand for mental participation

Alongside a wide range of the most diverse creative poetics, the artistic director of the festival reminded us of an important aspect in the relationship with the audience: "Strong visual performances often challenge the viewer's mind, as he or she has to let go of the attachment to conceptual understanding and indulge in personal associations."

It could be said that Lutke brings new ways of viewing to the Slovenian theatre space; many of the productions in this year's selection were energetically charged, dynamic, visually eclectic and expressive, and many were contemplative, lyrical, poetically subtler. In this way, the festival filled the lack of productions that would (in our country) refresh the established ways of reception of artistic (theatrical) work. In a world of diminishing attention and concentration, a world oversaturated with stimuli, it brings content that demands a new conception of viewing beyond the comfort of mental passivity, challenging the dominant narrative procedures.

The latter is also achieved by the Catalan actor and stage designer Xavier Bobés, who presented his production Corpus at the festival; through the animation of a dismembered statue of a man, which the artist places in a space of untreated wood, he deals with the question of victory in the battle between human and nature. This intimate performance is based primarily on animating the viewer's gaze (the "puppets" are static most of the time), while keeping in line with the current trend in puppetry without overly searching for dramatic climaxes. This current trend is based on the idea of the existence of the puppet in itself, while it requires the spectator to participate actively in thought, which begins to create a narrative, a story.

Bobés is already known to the local audience. As he said: "I first performed in Ljubljana in 2006 with Head in the Clouds – Nevenka Koprivšek saw it in Catalonia at a small festival and later supported my work for many years with the Bunker team. I was twenty at the time. Now I'm twice that age and I have to say that performing in Slovenia is still a big challenge for me. This is my second time at the Lutke Festival; the first time was in 2018 with the miniature Things Easily Forgotten. In my opinion, the Lutke Festival has become an indispensable meeting point for puppet, visual and dance artists, as well as for other types of artists and producers."

The world as it should be

With a series of productions that open up new ways of viewing, the festival also reached into the field of puppet theatre for children and toddlers. A set of six productions broke with the conventional narrative construction of children's content and proved that the focus of puppet theatre for children is not only on the figurative puppet, opening up the opportunity for enriched theatre literacy. The performances In Mixed Lines and Playing Tones are based on the interactivity of the first theatrical experience, whereby the exploration of the world does not end when entering the theatre hall, but only begins; in In Mixed Lines, the creators become the children themselves, while in Playing Tones, the young audience explores the world of sensory perception by touching, kneading and knocking. The Sand Pit also translates children's play into a performance strategy, using the animation of sand to create a calming meditative experience. 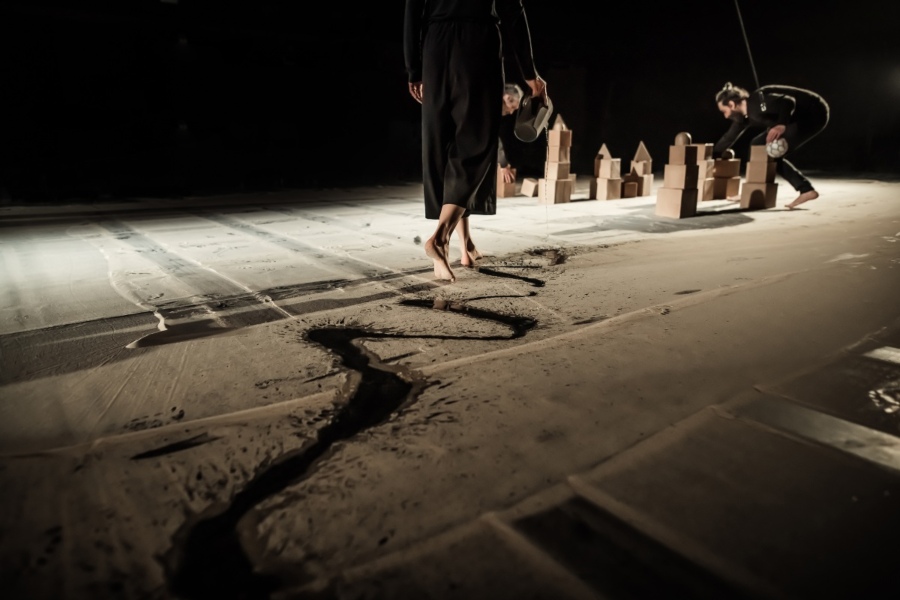 While the above-mentioned performances invite the viewers to fully immerse themselves in the theatrical experience, the productions Fearsome and Sonia and Alfredo bring the youngest closer to theatre as a space of discourse and self-reflection. The light and shadow play Fearsome uses light projections to interweave perspectives to talk about confronting fear, while Sonia and Alfredo takes the theme of fear to a collective level by addressing the issues of refugeeism and war migration with the right amount of sensitivity and courage. If the productions for youth and adults held up a mirror to society and called it to self-reflection, those for children interpreted similar themes in stories that show not what the world is like, but what it should be like. The central lessons they drew were about promoting friendship, compassion and a general love for the world around us.

"The Lutke Festival is a melting pot of diverse and unimaginable theatrical approaches. Here, fringe, experimental and in-depth performance languages meet, united to a large extent by unconventionality," said musician and theatre-maker Matija Solce, who, with his three puppet cabarets (The Hatchet, Exit and Darkroom), was undoubtedly one of the highlights of this year's festival. His creations of object theatre perhaps best illustrate what this year's international biennial festival of contemporary puppetry was aiming for – the search for the puppet where we cannot imagine it.