There Was Brightness, There Was a Light and Something Softened

Renaud Herbin (alongside puppeteers like Fabrizio Montecchi, Matija Solce, Tin Grabnar and others) is becoming a permanent fixture in the programme of the biennial international festival of contemporary puppetry Lutke. The director, puppeteer and former director of the French National Theatre Centre of the Alsace Region, TJP CDN Strasbourg, this time presents a short visual-sound poem for a marionette entitled Something Softens (Quelque chose s'attendrit).

In 2016, Herbin appeared at the Lutke Festival with his production Milieu, a fusion of technically sophisticated metal construction, intricate sound animation and the gravitational play of animator and marionette. Two years later, the French artist returned and premiered the dance-puppet poem At the Still Point of Turning World, where a dancer, a human-sized marionette and a special puppet formation in the form of 1500 hanging white sacks led the audience into a hypnotic and meditative experience and contemplation of the stage space. In the same year, he presented his production Open the Owl (co-produced by the Ljubljana Puppet Theatre), in which the key role was played by Milan Klemenčič's miniature marionettes (replicas) from his play The Owl Castle (1936), as well as an adaptation of Pocci's story. Using multiple video projections, multiple perspectives and spatial illusions, Open the Owl foregrounded the relationship between the puppeteer animator and the puppet, and between the image and its background (a look behind the scenes of the action). The interplay of puppetry, acting, dance, sound and visual elements in the creative process and work is therefore crucial for Renaud Herbin, as evidenced by his long-standing exploration of the relationship between the object, the body and the image (corps-object-image). Here we have to mention the meditative and slowed-down style of his productions, as well as the frequent presence of motifs from plays and literature.

Something Softens follows the arc of Herbin's work, but the viewer who is at least slightly familiar with the French puppeteer's work is now confronted with a new experiential element, light. The small hall of Kino Šiška takes you into a darkened space with a small screen in the middle, at the beginning still covered. Around the central screen, three screens are placed on each side, with projectors behind and speakers below. Each projector or optical device, consisting of a reflector and several lenses, reflects its own image (although at first sight the same as the others) onto the screen. The audience, entering the space of the action, is invited to silently observe the images (sound and lighting design in the production is supervised by Anthony Abrieux). The viewer is confronted with images that resemble eyes, two-dimensional planets or microscopic slides (the reflecting image is made up of resin and small dust particles on a single lens). The initially seemingly still images on the canvases change in an extremely slow, minimalist rhythm (the changing of the image is made possible by the mechanised movement of the lenses and thus the changing of the visage). The viewer can move freely between screens and projectors, choosing again and again a different way of looking at and observing the images. The movement (of the viewer, the image on the screen), though minimalist, teases the imagination and seduces into a hypnotic unravelling or accumulation of meanings, accompanied by a subtle soundtrack or music (each speaker under the projector creates a different sound picture created by Sir Alice for the performance). 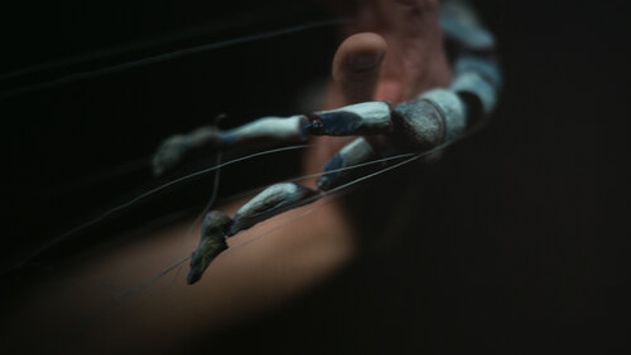 The first part of the performance, a meditative observation of the audio-visual space, is interwoven with poetry (the author of the poem is Renaud Herbin)*, interpreted in a calm manner by Rafi Martin. In the second part, he takes the audience to the central screen, where movement turns into optical exploration, and the attention is drawn to an artistically sculpted miniature wooden marionette (made by Hélène Barreau). Martin uses delicate manipulations behind the central screen to hold, encourage and move the puppet, while creating optical illusions using various objects (a styrofoam ball, a black cover, a sheet of paper). This kind of animation of the puppet and objects on the central screen creates a very special image, which is enhanced by the use of a double lens and two reflectors. This is because they allow a double optical effect, where the animated elements are copied multiple times. Although the viewer can clearly see that the marionette is animated from above (hanging by its strings), the image on the screen shows the reverse (the marionette's strings are projected from below). Thus, slowly, in a space where blur is the rule and focus is the event, as the director himself says, the narrative direction of the production unfolds. It questions the power of gravity, the possibilities of light, the infinity and vastness of the world in which the tiny marionette finds itself.

With Something Softens, Renaud Herbin continues to explore his distinctive creative style. His work still focuses on concepts such as gravity, the relationship between humans and the world, the potential of technological devices to enhance the artistic experience, and the subtle and slowed-down experience in space. This does not mean, however, that he is repeating himself in his fidelity to these concepts. On the contrary, by repetition, by using a method of exploring the body, the object and the image that is different again and again (in this production, he has collaborated and explored with Sophie Prietz, Anthony Latuner, Éric Fabacher, Thomas Fehr), he proves that his creative power is still very much alive. But just as alive can be the experience of anyone who allows him- or herself to be seduced into the darkened, light-beamed interior of their own imagination. 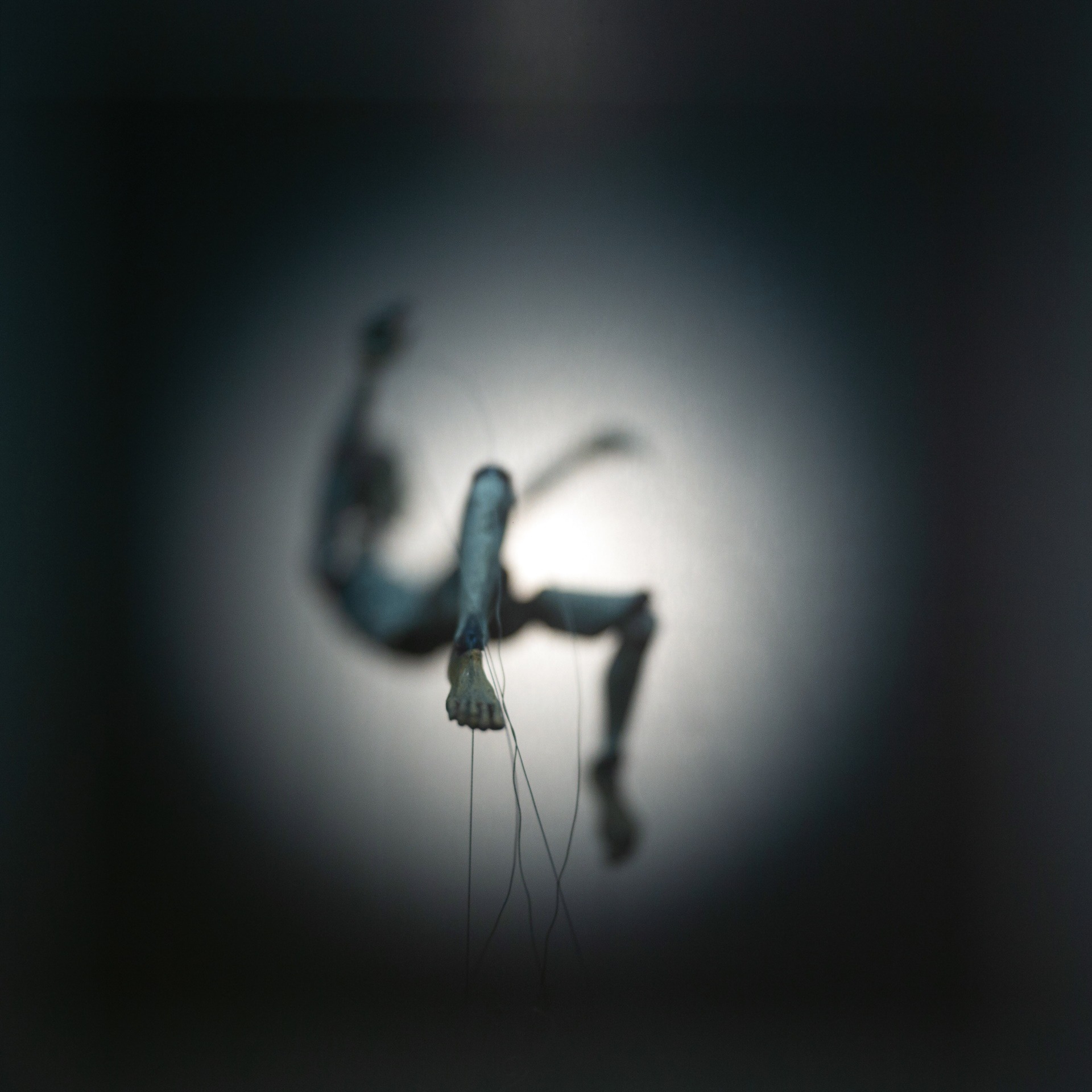 * Excerpt from the poem: "To watch / to watch the light of the eye that watches me travel / from the other side / something softens / at least it watches us"