Visual theatre in the Baltics

The first program of the festival Baltic Visual Theatre Showcase was introduced in Tallinn in May of this year. The new project, which will be organized every second year in a different Baltic country, aims at drawing attention to the promotion and dissemination of visual theatre field and the international presentation of its creators. Although the program of the Baltic Visual Theatre Showcase mainly consists of performances based on different puppets and their control techniques, the name of the festival implies a wider presentation of the field of the performing arts, including elements of the circus, physical, object and movement theatre.

Among the rich selection offered in the program, the festival participants had the opportunity to see performances for both adults and children. The Lithuanian program for children invited them to learn, discover, and experiment (“Tiny Worlds” directed by Birutė Banevičiūtė, Kaunas State Puppet Theatre, “Siberian Haiku” directed by Saulė Degutytė, “Stalo teatras”, “The Big Bang” directed by Zvi Sahar, Klaipėda Puppet Theatre). However, Latvian, and Estonian theatre for children did not leave a positive impression, on the contrary, it revealed itself as lacking attention to a wider range of discussion topics and a more subtle look at the environment. Does a woman become happy only when she falls in love (“The Queen of Seagulls” directed by Edgars Kaufelds, Latvian Puppet Theatre)? Does the open door of the zoo change the fact that the animal cages have bars (“Aardvark the One” directed by Edgars Niklasons, Rezekne theatre “Yorick”)? Do abundant special effects and a large budget guarantee the quality of the work (“Topsy-Turvy” directed by Leino Rei, Estonian Youth Theatre)? It is also true that those same works featured fascinating scenography and different puppet management techniques. However, performances for older audiences (14+) offered more joy. There were 5 of them in the program of the Baltic Visual Theatre Showcase: Estonian “YLT” (Estonian Youth Theater, 2021), “Emilie Sagée” (Kellerteater, 2019) and “Vasenka” (Russian Theatre, 2019), Latvian “Wood Paths” (Gertrude Street Theatre, 2020) and Lithuanian “The Picture of Dorian Gray” (Vilnius Theatre “Lėlė”).

“Wood Paths”, “YLT” and “The Picture of Dorian Gray” represent a time well and usefully spent. These are examples of works that, in one way or another, open up a space for discussion not only during, but also after the performance, while their visual solutions remain etched in the memory. However, the most striking advantage and similarity of these three performances is the relevance of themes and their original presentation to the audience.

“Wood Paths” is an example of the visual work of director Andrei Yarovoj, dominated by elements of movement and physical theatre. During the performance, the performers Rudolfs Gedinš and Edgars Samītis cut massive logs on the stage. The logs are then divided again and again, until a forest of different height logs is formed. This process gives a real aesthetic admiration – the viewer sits stretched out in a chair, while the actor is plodding on the stage – a fascinating and at the same time a strange and a little uncomfortable experience. On the stage, the rising of the ax driven into the tree bark creates a dance of wood chips. Thus, one chop after another, the floor is covered by chaotic patterns of wood chips. I would not be surprised if a few of them got caught in the hair of the viewers sitting in the first rows. This rhythmic, silent process of cutting is hypnotizing. The state of the viewer becomes a favorable condition for one of the woodcutters to change into a moss costume, representing a forest spirit/monster, and to suddenly appear from behind a paper image of the forest placed in the back of the stage. Sounds absurd? And so it is, but the directorial choice used at the right place and time is met with a burst of laughter, an ironic smile, and a slight confusion. Such feelings liberate from the principles of cause and effect so often encountered in theater. It is also unique that this unexpected decision touches on the extremely sensitive topic of ecology. Forests are cut down, the homes of many living organisms as well as natural flora and fauna are being destroyed, climate change is taking place, while all this is observed and wordlessly commented on by the forest spirit. Well, what else is there to do? Of course, “Wood Paths” is also important because of the very simple, but not always self-evident idea – theatre is work. Creating a performance is a physical demanding work that requires a lot of effort. 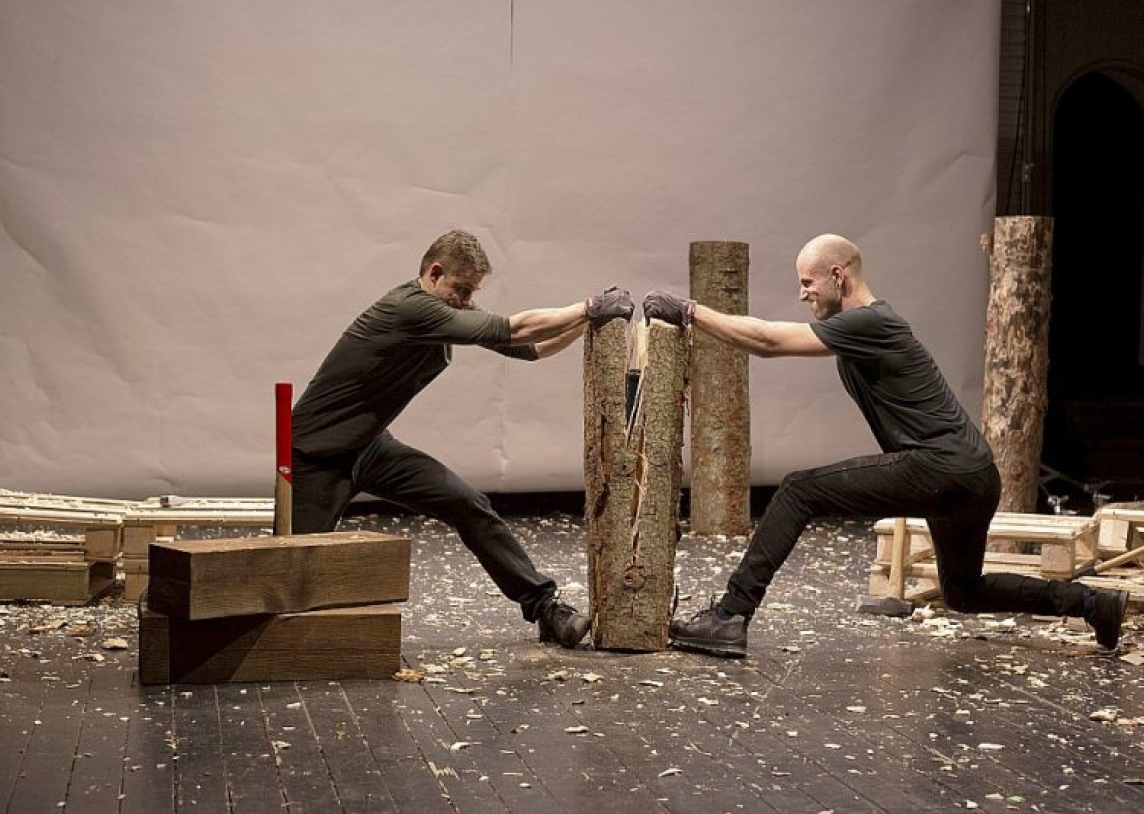 In the building of the Estonian Youth Theatre located in the Old Town of Tallinn, with endless doors hiding sewing, decoration, puppet and prop production workshops, a large number of different halls and rooms, a cafe and a puppet museum, the visitors of the festival visitors were introduced to Renata Keerd’s work “YLT” - a physical, movement performance. It is also full of relevant absurd moods – in one of the episodes we see the actress dressed in a long, body-covering dress made from heavy material, decorated with patterns of an old carpet, which can typically be seen hanging on the walls of grandmothers’ homes. As if it is not enough, this impressive-looking outfit starts to get beaten while the actress is still wearing it. Yes, with a plastic spatula. Of course, the rising clouds of dust look impressive and tickle the nose and the character seems to enjoy the process, but if we distance ourselves from these aspects, we see a person being hit from all sides. The whole performance consists of the repetition of seemingly meaningless actions, but they eventually develop into sharply presented themes of miscommunication, consumerism, and power relations in the background of war. The scenes performed by the actors Getter Meresmaa, Steffi Pähn, Anti Kobin, and Sander Roosimägi never connect into a coherent plot and create separate moving pictures. These are characterized by different themes, the relationship between the performers and the observers, the range of colors, the soundtrack, the mood, etc. Individual scenes do not explain each other, but this is not lacking, same as in the performance “Wood Paths”. Individual plots performed by actors tell their own stories and build intrigue through different associations and interpretations. Two performers are wearing giant plush masks of starlings and discussing domestic issues, a platform is brought to the stage and on it the actors perform a live rock’n’roll concert, the main purpose of which is to criticize the war.  A huge pile of clothes is replaced by a sterile white space, the noisy soundtrack – by silence. Trying to foresee what other issue the next scene will present becomes a constant intrigue of the play.

The stylistics and nature of Gintarė Radvilavičiūtė’s performance “The Picture of Dorian Gray” cannot be compared with the already discussed Baltic Visual Theatre Showcase performances for adult audiences, as it is puppet theater performance. On the stage, puppeteers Sigita Mikalauskaitė, Šarūnas Gedvilas, Erika Gaidauskaitė, and Deivis Sarapinas create visual – illusional – theatre. With the help of mirrors, the reflections of dancing hands are created, the emerging bodies and faces of the actors emerging open the illusion of another world of deformed bodies and mirages. Active imagination turns Dorian Gray’s lifetime journey into an unexpected theatric experience. The assembled stage/box combines the elements of actors, puppets, story told in the subtitles, and music. True, during the performance I had closed my eyes several times, lulled by Rita Mačiliūnaitė’s music, and lost the plot. However, the melancholic, constantly changing melody, reminiscent of oriental sounds, gusts of wind, rattling dishes, or the vastness of space, turned into a second performance of the mind. Gintarė Radvilavičiūtė’s interpretation of Oscar Wilde’s work illustrates an attempt to expand the boundaries of vision and thinking. That is how the elements of scenography – the frame of the picture and the mirror – acquire more than just the suggestiveness of a visual choice, and the stiff, gray plaster marionettes controlled between them begin to breathe. The fast-paced, morally decadent world is given a suggestion – look in the mirror. What does your image look like? 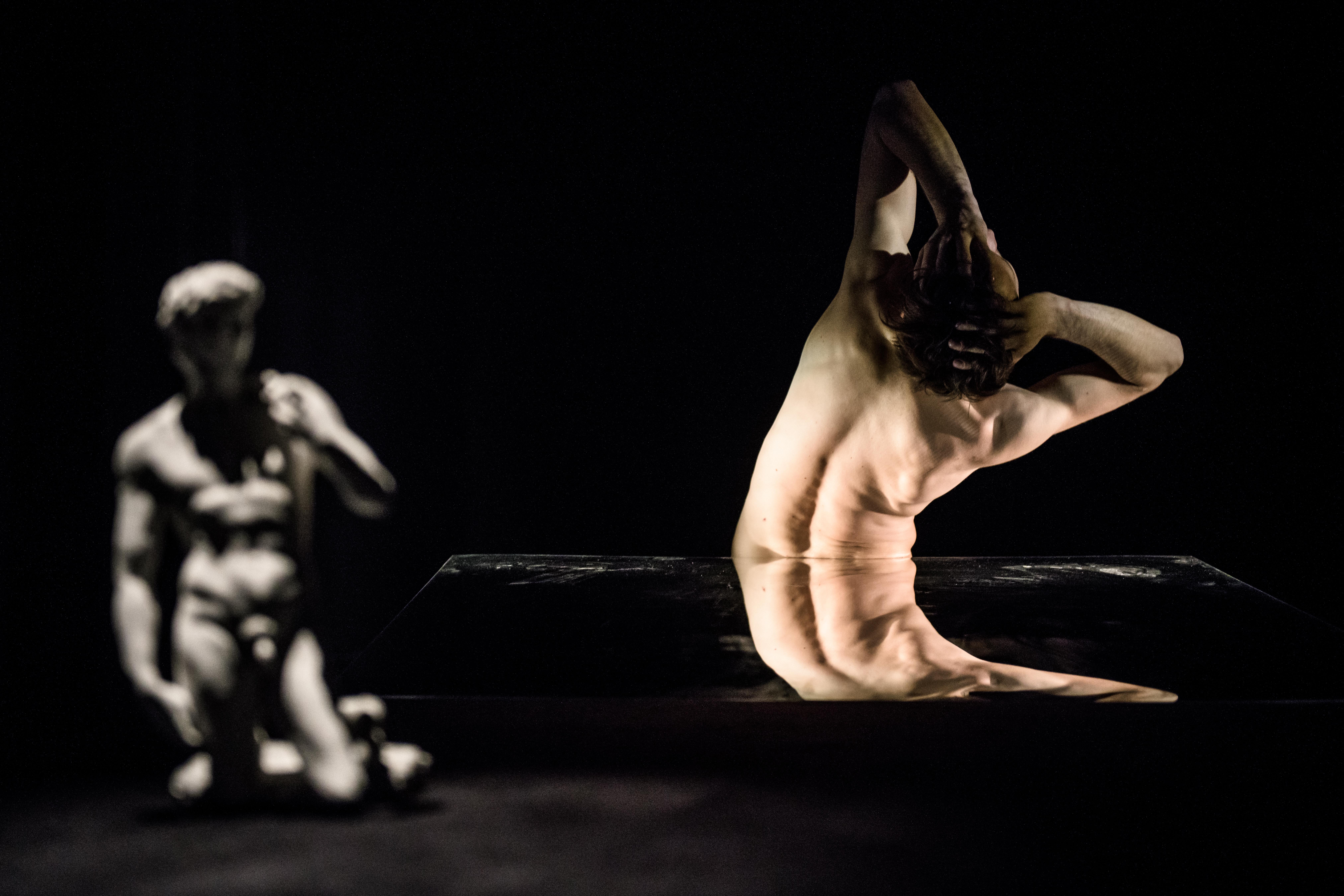 The remaining performances of the adult program did not shine so brightly: Daniil Zandber’s “Vasenka” and Kersti Heinloo and Raho Aadla’s “Emilie Sagée”. The latter performance showed a well-known horror story about a woman and her ghostly twin who does not exist in reality. The presentation of local, narrative sources on the stage sounds intriguing, but the chosen directorial format – theatre of senses – did not convey neither the story nor the feeling, so the relevance of the performance remained somewhere in the background. The lights turned on and off allowed the actresses to imperceptibly change places on the stage, thus creating a recurring stop-frame motif in the background of the blaring music. However, a performance based on this one principle naturally creates a feeling of boredom and disappointment – after all, theatre of senses is more than just a play of lights and deafening sound. In the performance “Vasenka” creators also explored a relevant theme of family relations. Although the story seen on the stage is tragic – the death of a child invokes the mother’s alcohol addiction, parental discord, indifference to a loved one and finally – suicide – the chosen acting technique, effects, and scenography elements make the family story somewhat comical. Overly expressive acting prevents viewers from focusing on the action of the performance (although it is also quite predictable). If an actor falls down on the stage, it is only to hurt himself, if the mother is wrapping her two-meter-long braid of hair around her neck, she will most probably hang herself. Not intensive enough? The effect of creaking floor comes to the rescue.

The festival program for adult viewers emphasized the human relationship with being, everyday life, environment, the world, and oneself. After all, these topics rarely become boring, especially since relevance is not a relative concept, but rather it is important for every work of art. The festival raised the question – which direction is visual stage art moving towards? During the Baltic Visual Theatre Showcase theatre halls full of viewers suggested the consumers’ need for art, and consequently – the demand for performances. Also, creators are challenged by various visual theatre platforms, events, the rapidly expanding field of performing arts, and the expectations of the audiences. However, the Baltic Visual Theatre Showcase revealed that the creators of performances intended for adults, at least the majority of them, coped with the responsibility placed on their shoulders and presented visual and puppet theatre works that were persuasive, professional, and worthy of the viewers’ attention. The start of the festival with a group of artists enthusiastically sharing their experiences definitely set a positive mood.