What is visual theatre?

The article is based on a seminar "What is visual theatre" held at Treff festival in 2019.

In the following I will try to speak about a bunch of terms that circle around visual theatre and are its sub-terms: puppet theatre, object theatre, material theatre, physical theatre, multimedia and digital theatre. I will show how these terms have been conceptualised from the perspective of theatre researchers.

The title of this article is “What is visual theatre?” We are not going to define it fully and put the term into a box. One could ask, does non-visual theatre exist? Of course, visuality is an ontological part of theatre. I feel that it is useful to speak about a dominant means of expression. That is, if a visual side is dominating in a performance, then there is reason to speak about visual theatre. I will start, very briefly to outline the historical background.

Historical innovators are the modernists in the beginning of the 20th century. The performances by Dadaists and surrealists. Their aim was to free the arts and theatre from the suppression of the word and literature.

Also the visual school of Bauhaus. The notion “visual theatre” was indeed first used in the Bauhaus. German painter, sculptor and choreographer Oscar Schlemmer staged performances at the Bauhaus school where dancers were geometrically organized on stage – they looked like living sculptures. The innovation here was that Schlemmer started with the visual dramaturgy. “Triadic Ballet”, premiere 1922.

Another time when visual theatre came to forefront was in the 1980s when theatre companies began to experiment with a more physical type of theatre. They wanted to get away from the restraints of realistic and naturalistic drama and create an energetic visual theatre that combined strong design with choreography and physical imagery. 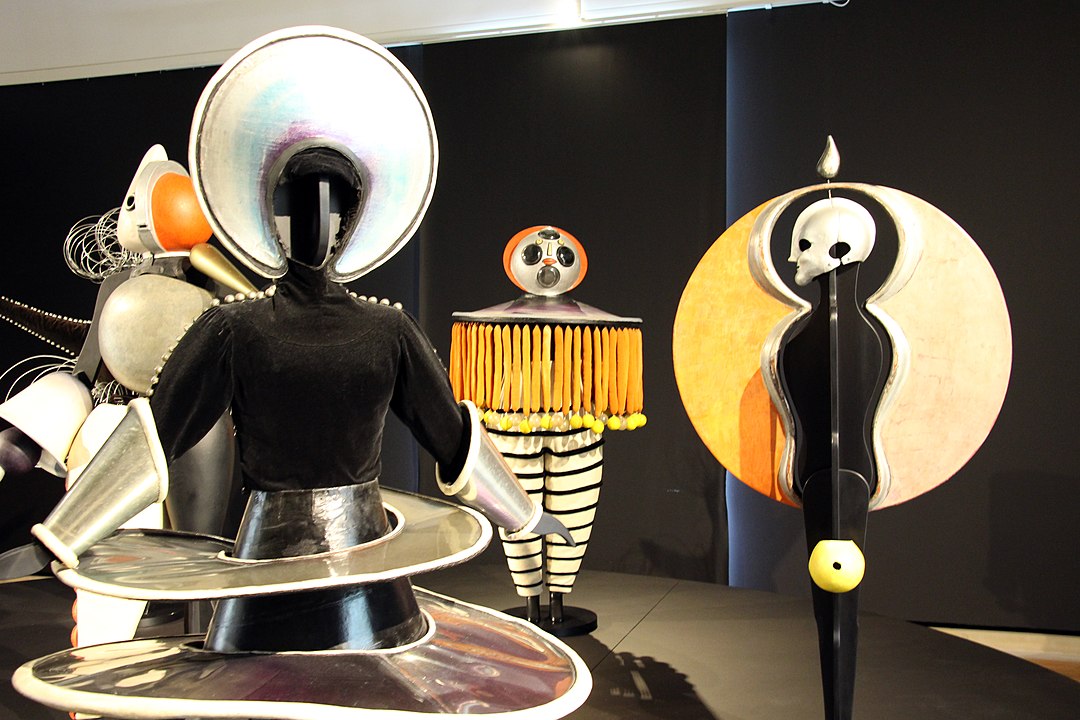 Visual theatre can be seen as an umbrella term under which to collect several forms of theatre. I will start with puppet theatre.

Puppet theatre is a form of theatre that involves the manipulation of puppets – inanimate objects, often resembling some type of human or animal figure, that are animated or manipulated by a human called a puppeteer.

There are many different varieties of puppets, and they are made of a wide range of materials, depending on their form and intended use: finger puppet, sock puppet, hand or glove puppet, marionette, rod puppets, shadow puppets.

Often seen as a sub-term of puppet theatre, is object theatre. In object theatre the untransformed “thing” is explored: there are two main uses: a) in itself (to find its inherent movement/physical properties), b) to use the “thing” as a character/symbol in a story. In object theatre a real life object is explored on stage. The manipulating of the object is based on its movement or sound characteristics that may or may not relate to its actual use.

The object is endowed with agency (character, narrative, movement) through its use by the puppeteer who gives it meaning by putting the thing into the performance frame. On the other hand, there is a counter theme which many practitioners allude to: the object does have tendencies (ways of moving and sounding) that are its own and only revealed to the manipulator/narrator through improvisation in the workshop.

The popularity of this practice developed in the 1980s, though the genre of course has older roots. Such explorations of the moving object go back to Oskar Schlemmer’s Bauhaus experiments. It has also roots in the work of modern dance choreographers (like Alwin Nikolais) in 20th century New York: f.ex where dancers manipulated stretchable fabric into aesthetic shapes that may mirror abstract expressionist experimenting in visual arts.

One root of object theatre refers to the “ready-made” art object as conceptualized by Marcel Duchamp. This branch of performers may also be influenced by the Fluxus movement in the United States (John Cage, Merce Cunningham) or Germany (Joseph Beuys). While these figures, coming largely from the world of visual arts, music, and dance, enhanced their practice with considerable theoretical discourse, this root highlights the two potential directions that object theatre goes: it has a populist stance (cheap, lower class, “because it is there” we do it) while it may have a highly theorized conceptual subset of practitioners.

Another branch of theatre that is often associated with visual theatre, is physical theatre. Physical theatre encompasses storytelling primarily through physical movement. Although several performance theatre disciplines are often described as "physical theatre," the genre's characteristic aspect is a reliance on the performers' physical motion rather than, or combined with, text to convey storytelling. Performers can communicate through various body gestures (including using the body to portray emotions).

Common elements of physical theatre include:

Physical theatre as we know it has been speculated to have many different origins.

a) One very prominent influence on physical theatre is mime and theatrical clowning schools, such as Jacques Lecoq. Jacques Lecoq and Philippe Gaulier with companies like Theatre de Complicite used their unique theatrical background and apply it to classical texts.

Another strand of theatre that is often associated with visual theatre encompasses Multimedia and Digital theatre. It is a hybrid art form. Digital technology helps to reach the audience through visualization.

So, as I have shown, there are several possibilities to define “visual theatre” and it is also very closely connected to the cultural context.

To sum it up, visual theatre can be defined through movement since movement is the main aspect that organizes the action on stage. Through movement the performers send information, show relationships and emotions. Movement includes mime, all kinds of dances, gestures, circus, acrobatics.

On the other hand, visual theatre also includes work with masks, puppetry and object art.

Characteristic is also the use of digital technology and multimedia – different kinds of projections and video.

Visual theatre does not necessarily avoid words. Spoken language can be used in a variety of ways. Often an important sign system is also the music and sound design.

Most important in visual theatre is that the meaning is conveyed to the audience by visual language. In visual theatre, the image is in the foreground.